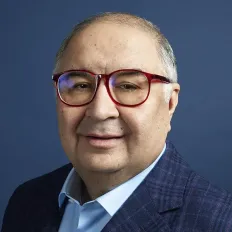 When Alisher Usmanov left to study in 1971, his grandfather did not understand why Moscow was needed when there was Tashkent. The future billionaire explained that he was going to study for an ambassador - who goes to MGIMO without that dream? In 1976, Usmanov graduated from the International Law Faculty and returned to Tashkent. Life and career were going well: his father was a prosecutor in Tashkent, Alisher worked as a senior adviser to the Uzbek Komsomol Central Committee, he had extensive connections (Usmanov's classmates included former Yeltsin press secretary Sergei Yastrzhembsky and Kazakh billionaire Fattakh Shodiev) and brilliant prospects.


But in 1980, his whole former life came to an end when a court sentenced Usmanov and two of his friends, Bahadir Nasymov, son of the deputy chairman of the Uzbek KGB, and Ilkham Shaikov, son of the agricultural minister, to jail on fraud and embezzlement charges.


The billionaire himself told Forbes that the buddies were victims of a clan fight between the center and the national elite, aimed more against the parents of the golden Uzbek youth than against the young people themselves. Usmanov then received eight years, served six, and was released early in 1986. Only in 2000 did the Supreme Court of Uzbekistan rehabilitate the convicts, finding the case trumped up. By that time Usmanov was already doing business in Moscow.


From 1994 to 1998, Usmanov headed the Interbank Investment and Financial Company Interfin and in that position was engaged in recovering gas debts. In the late 1990s, Gazprom and Interfin bought controlling stakes in OEMK and Lebedinsky GOK, merging them into Gazmetall. In 2002 Interfin bought out Gazprom's stake in this company. Another three years later, in 2005, Usmanov together with Vasily Anisimov bought Mikhailovsky GOK from Boris Ivanishvili. In 2006 all these assets were merged into Metalloinvest, which was co-owned by Andrey Skoch and Anisimov in addition to Usmanov.


First business In the late 1980s he organized the cooperative Agroplast, which produced polyethylene bags.


Yacht The Usmanov family owns the yacht Dilbar, 156 meters long - not the longest, but the most spacious in the world and the most expensive of all the yachts of Russian billionaires, its estimated value - $550 million. Frozen because of sanctions in the port of Hamburg.


Soccer In 2018, Usmanov sold his 30% stake in London's Arsenal FC for £550 million to another shareholder of the club, billionaire Stan Cronk. He now supports the Russian club of the same name, Arsenal FC (Tula). His partner Moshiri owns 77.23% of shares of another English club, Everton FC, which is sponsored by both USM and Megafon.


Sports Usmanov is a master of sports in fencing and since 2008 he has been the president of the International Fencing Federation (FIE) headquartered in Lausanne.


Detail He is related to Uzbek President Shavkat Merziyoyev - they share a grandniece, the daughter of Usmanov's nephew Babur, who died in a car accident in 2013, and Merziyoyev's niece Diora.


Inheritance "Why give the business to children who do not know how to work?  <...> You can inherit money from the business, but about the business itself you have to think long and hard about who to leave it to," Usmanov reasoned in an interview with Forbes in 2019.


Impact "I at 63 [years old] will finish my history of profiteering... I will be engaged in philanthropy," Alisher Usmanov, the largest shareholder of the USM holding company, said in an interview with Forbes in April 2012. The billionaire is now 67 years old; he has not completely retired from business, but by and large he has kept his promise: in the last 10 years he and all his companies have spent a total of almost $5.2 billion on charity, social and environmental projects. Usmanov himself accounts for $1.29 billion of this amount; some money went through two funds - Art, Science and Sports and For the Future of Fencing. His philanthropic work extends to 60 countries, including Uzbekistan, Italy and Great Britain. A typical example: in December 2019, Usmanov bought at Sotheby's for $8.8 million the Olympic Manifesto.